Sudoku can look deceivingly easy to solve due to its simple and straightforward rules. Nevertheless, these puzzles are designed to always be challenging, regardless of the level. New players are thus bound to encounter difficulties filling the grid and should expect to do so. Fortunately, there are some Sudoku strategies for beginners that can help them find their way easily and to get used to the mechanics of the game.

Crosshatching is the first strategy any Sudoku player can apply when facing a Sudoku grid.

The player should focus on each square of 3x3 at a time and detect the missing numbers in them. The next step will be to take every digit individually and cross the information of each row and column the other squares connecting to the one being analyzed. 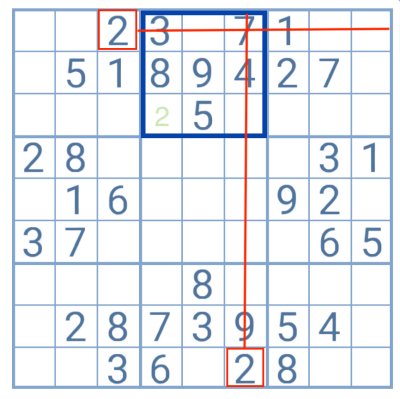 In the highlighted square, there are three empty spots to be filled with the missing numbers 1, 2 and 6.

Two rows connecting to the main square contain the number 1. Crossing this information will still leave two possible places open for this digit, though. Similarly, the 6 is present in one column connecting to the square, but once again it will only eliminate one possibility leaving this digit as a candidate to two cells.

However, testing for number 2 reveals only one possible solution for this digit. The player can then safely fill the only blank space left with it.

Note: Although it cannot be considered as part of Sudoku strategies for beginners, players should always pay careful attention to the grid’s evolution every time a new number is placed.

In the example above, the cell that number 2 took was one of the possibilities also for number 1. Thus, now there is only one solution for this digit also. And by placing number 1, only one blank remains, the one to be occupied by number 6. Number 2 unlocked to solution for the highlighted square.

Counting is a useful strategy when the player finds a row or column partially filled, with only 2 or 3 missing blank cells.

As there cannot be any digits repeated per cell or column, the player only has to count the allocated numbers to find the missing ones. This will allow the player to set candidates for each blank cell. The next step will be to cross the information of rows, columns and the group the cell is inserted in to try to find the solution. 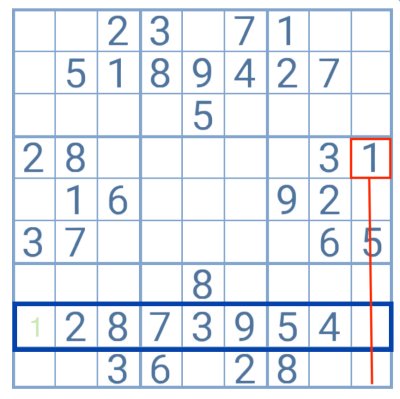 Numbers 1 and 6 are the only ones missing in the highlighted row, so the player can safely note them down as candidates for the two remaining blank cells.

However, crossing the information of the columns that connect to each blank cell reveals that number 1 only has one possible placement in the highlighted row. The only place left will then be occupied by number 6.

Naked singles have a high incidence in easy levels, which makes it ones of the most useful Sudoku strategies for beginners to learn.

To apply it, the player should note down every candidate for each individual cell. The easiest way is to focus on each square of 3x3 at a time. If after taking note of every digit the player finds one cell with one single candidate (or a naked single), that will be the solution, regardless if that number is also a candidate in other cells within that group, row or column. 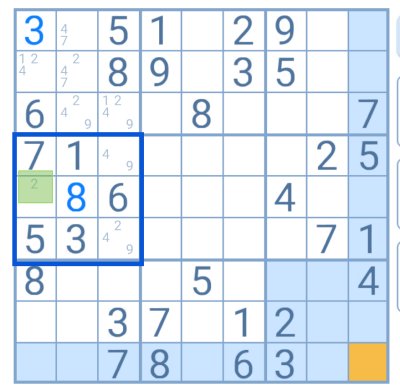 The grid above is an example of a work in progress in Sudoku. There are still many uncertainties and many blank spaces

Number 2 has two possible solutions in the highlighted square and it is yet impossible to determine its position by solely crossing the information of rows and columns. However, when the player filled the candidates for each cell in that group, number 2 remained the single candidate for one. The player has thus found a naked single and can safely place number two.

While naked singles refer to a cell with a single candidate, a hidden single occurs when one digit as only one possible position, even if it's mixed with other candidates in that cell. In this case, the player can safely remove the remaining candidates and keep the solution. 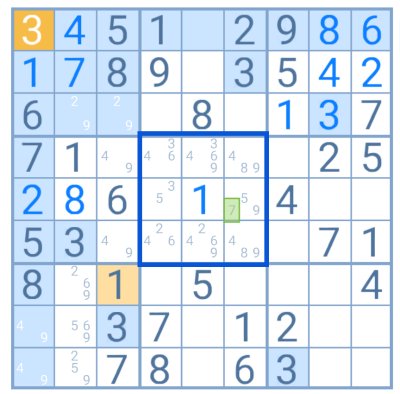 In this example, number 7 only has one possible solution in the group in which it is inserted. That will thus be its final position. It is a hidden single, because numbers 5 and 9 are also candidates for its cell.

Pairs are a set of Sudoku strategies for beginners that help to reduce the number of candidates in cells, rather than finding a solution.

Naked pairs are the most simple and easy ones to spot. They occur when two cells in one row or column have solely two candidates and these are identical. The player cannot yet tell the final position for each digit of the pair, but they can already ascertain their overall position in the grid. Thus, those digits can be safely eliminated as candidates to other cells in the same row/column. 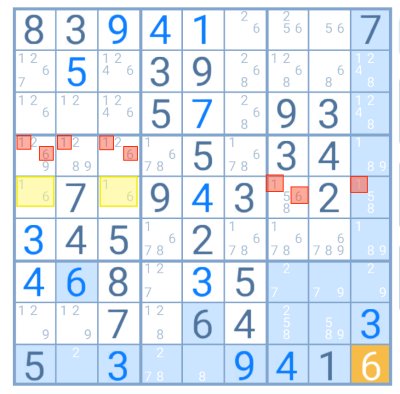 Hidden pairs take place in groups of 3x3. They occur when two cells have a pair of identical candidates, and these digits are not possible in any other place within that group.

Therefore, those will be their final position, even though the player as yet to find the solution. The remaining candidates can be deleted from those cells. They are hidden because they are often mixed with several other candidates, making it harder to find the pairs. 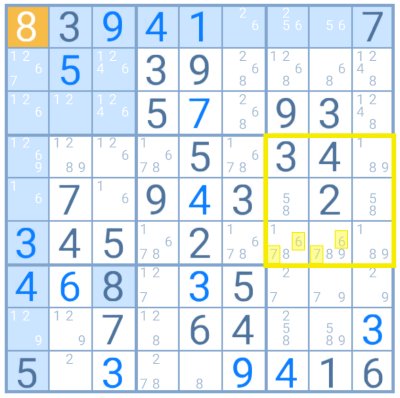 In the group highlighted, the numbers 6 and 7 are candidates in only two cells, and they are paired up. It follows that their solution will be found in these two spaces and, therefore, the remaining candidates to them can be eliminated (7, 8 and 9).

Because they are lined up in the same row, the result will be a naked pair. However, hidden singles do not necessarily give place to naked pairs, as they can be positioned anywhere within the group.

Naked triples are sets of identical pairs (a/b-a/b) or identical triples (a/b/c-a/b/c) that occur in three cells in one row or column. These three cells cannot contain more candidates.

The player can then assume the final answer will lie in those cells and eliminate those digits as candidates to any other cell in the same row or column. 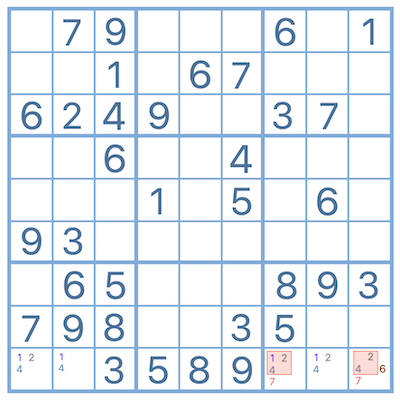 In this example, the player has a row with three cells containing three identical numbers (1/2/4). There are no other possible numbers for those cells. This means that placing a digit in one of them will directly affect the remaining two and force their solution.

For example, if the player places the 1 or the 4 on the first cell of the row, then the second cell becomes a naked single, which in turn will leave the third cell with number 2 also as a naked single.

If the player places the 2 as the solution for the first cell, then the two other ones will turn into naked pairs (1-4).

Therefore, regardless of the situation, the digits in this set (1/2/4) can be eliminated as possibilities for the other cells in that row.

Naked triples and locked triples are very similar Sudoku strategies for beginners. The only difference between them is, while the first occurs in a row or column, the later takes place within a group.

The assumption is the same in both cases. If the player finds three cells with 2 or 3 identical candidates alone, those digits can be safely removed as candidates to other cells within that group. 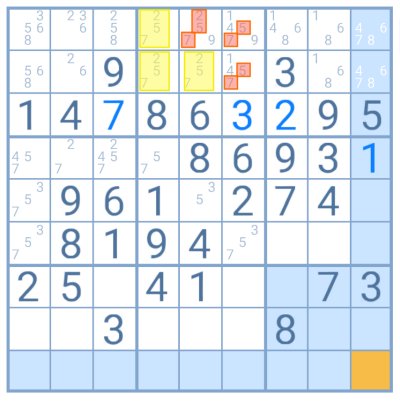 Highlighted in yellow are three cells with three identical candidates (2/5/7). As per the strategy locked triples, those digits can be deleted as candidates to other cells within that group (highlighted in red).

These Sudoku strategies for beginners are a great tool to any new player encountering these challenges for the first time. The more challenges the player faces, the more these strategies will become embedded in their brain and they will be using them without even realizing it. They are the first building block to become a Sudoku expert.